This add-on board makes it easy to control two high-power DC motors with a Raspberry Pi. Its twin discrete MOSFET H-bridges support a wide 6.5 V to 30 V operating range and are efficient enough to deliver a continuous 18 A without a heat sink. The drivers offer basic current limiting functionality, and they accept ultrasonic PWM frequencies for quieter operation. The default pin mappings make it easy to get started, but they can be customized for more specialized applications. This version ships fully assembled with connectors soldered in.

These G2 dual high-power motor drivers are add-on boards for the Raspberry Pi, featuring pairs of discrete MOSFET H-bridges designed to drive two large brushed DC motors. They are designed to mount on and plug into compatible Raspberry Pi boards (Model B+ or newer), including the Pi 3 Model B+ and Model A+.

The minimum operating voltage is 6.5 V, while the maximum operating voltages are given in the above table. The board also includes an integrated 5 V, 2.5 A switching step-down regulator that can be used to power the Raspberry Pi it is plugged into, enabling operation from a single power supply.

The driver’s default configuration uses six GPIO pins to control the motor drivers, making use of the Raspberry Pi’s hardware PWM outputs, and it uses two additional pins to read status outputs from the drivers. However, the pin mappings can be customized if the defaults are not convenient, and pins for current sensing and limiting are accessible on the board for more advanced applications.

The board matches the Raspberry Pi HAT (Hardware Attached on Top) mechanical specification, although it does not conform to the full HAT specifications due to the lack of an ID EEPROM. (A footprint for adding your own EEPROM is available for applications where one would be useful; pull-ups on SDA, SCL, and WP are provided.)

This version of the 18v18 motor driver is fully assembled, with a 2×20-pin 0.1″ female header (for the Raspberry Pi interface) and a six-pin strip of 5 mm terminal blocks (for board power and motor outputs) soldered in.

Four M2.5 standoffs (11 mm length), screws, and nuts are included to secure the board to the Raspberry Pi at the proper height for the GPIO connector. Shorting blocks and 0.1″ male headers (not included) can be used to make some of the more advanced optional modifications to the board, such as remapping the control pins. The motor driver includes six 100 μF or 150 μF electrolytic power capacitors, and there is room to add additional capacitors (e.g. to compensate for long power wires or increase stability of the power supply). Additional power capacitors are usually not necessary, and no additional capacitors are included with this motor driver. A Raspberry Pi is not included.

Using the motor driver board

An appropriate motor power supply should be connected to the motor driver’s large VIN and GND pads. The board includes a reverse-voltage protection circuit that helps prevent damage in case the motor power supply is connected backward. The reverse-protected input voltage can be accessed for use in other circuits through the two pins labeled VM on the left side of the board.

By default, the motor power supply also feeds a 5 V, 2.5 A switching step-down regulator that provides power to the connected Raspberry Pi. An ideal diode circuit makes it safe to have a different power supply connected to the Raspberry Pi through its USB Micro-B receptacle while the motor driver is connected and powered.

If you want to power the Raspberry Pi separately, the regulator can be disconnected by cutting two exposed traces on the board: one between the surface-mount pads labeled “VM” and “REG IN”, and another between the two pins by the “REG OUT” label, as shown to the right. On the 24v14 and 24v18 versions, disconnecting the regulator increases the absolute maximum operating voltage of the board to 40 V.

This table shows how the Raspberry Pi’s GPIO pins are used to interface with the motor drivers:

With the PWM pin held low, both motor outputs will be held low (a brake operation). With PWM high, the motor outputs will be driven according to the DIR input. This allows two modes of operation: sign-magnitude, in which the PWM duty cycle controls the speed of the motor and DIR controls the direction, and locked-antiphase, in which a pulse-width-modulated signal is applied to the DIR pin with PWM held high.

The motor driver supports PWM frequencies as high as 100 kHz, but note that switching losses in the driver will be proportional to the PWM frequency. Typically, around 20 kHz is a good choice for sign-magnitude operation since it is high enough to be ultrasonic, which results in quieter operation.

A pulse on the PWM pin must be high for a minimum duration of approximately 0.5 µs before the outputs turn on for the corresponding duration (any shorter input pulse does not produce a change on the outputs), so low duty cycles become unavailable at high frequencies. For example, at 100 kHz, the pulse period is 10 µs, and the minimum non-zero duty cycle achievable is 0.5/10, or 5%.

The motor driver can detect several fault states that it reports by driving the FLT pin low; this is an open-drain output that should be pulled up to your system’s logic voltage. The detectable faults include short circuits on the outputs, under-voltage, and over-temperature. All of the faults disable the motor outputs but are not latched, meaning the driver will attempt to resume operation when the fault condition is removed (or after a delay of a few milliseconds in the case of the short circuit fault). The over-temperature fault provides a weak indication of the board being too hot, but it does not directly indicate the temperature of the MOSFETs, which are usually the first components to overheat, so you should not count on this fault to prevent damage from over-temperature conditions.

All of the Raspberry Pi’s GPIO pins are broken out along a row of numbered through-holes just below the 40-pin GPIO connector. Each GPIO pin used by the board is connected from this row to the corresponding motor driver pin by a trace on the top side of the board spanning the pair of holes. If you want to remap one of these motor driver pins, you can cut its trace with a knife and then run a wire from the lower hole to a new GPIO pin.

Note that the default pin mappings were chosen so that the Raspberry Pi’s default GPIO pull-ups and pull-downs match the direction the motor driver pins are or should be pulled (up for SF, down for others); if you remap the motor driver pins without paying attention to this, you might encounter issues with pins being pulled the wrong way. See the Raspberry Pi documentation for more about the default GPIO states.

The motor driver exposes current sensing and limiting pins that are not connected to the Raspberry Pi, but they are accessible through their own through-holes in case you want to use them in a more advanced application.

The driver has the ability to limit the motor current through current chopping: once the motor drive current reaches a set threshold, the driver goes into brake mode (slow decay) for about 25 μs before applying power to drive the motor again. This makes it more practical to use the driver with a motor that might only draw a few amps while running but can draw many times that amount (tens of amps) when starting. 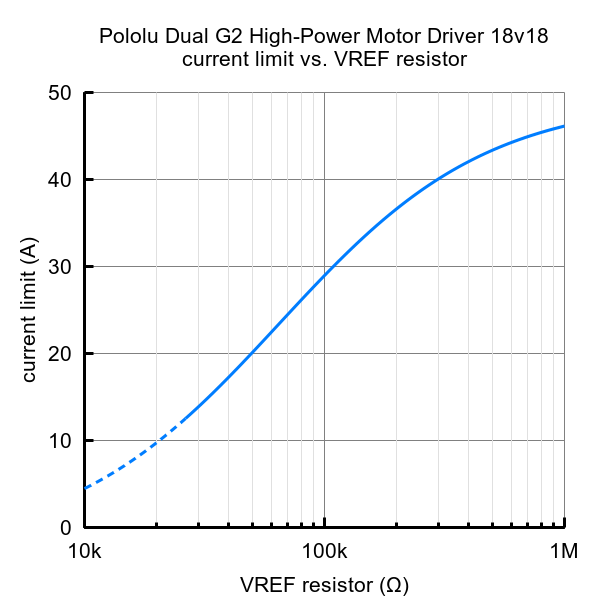 The driver’s current sense pins, labeled CS, output voltages proportional to the motor currents while the H-bridges are driving. The output voltage for this version is about 20 mV/A plus a small offset, which is typically about 50 mV.

Each CS output is only active while the corresponding H-bridge is in drive mode; it is inactive (low) when the channel is in brake mode (slow decay), which happens when the PWM input is low or when current limiting is active. Current will continue to circulate through the motor when the driver begins braking, but the voltage on the CS pin will not accurately reflect the motor current in brake mode. The CS voltage is used internally by the motor driver, so to avoid interfering with the driver’s operation, you should not add a capacitor to this pin or connect a load that draws more than a few mA from it.

The MOSFETs can handle large current spikes for short durations (e.g. 100 A for a few milliseconds), and the driver’s current chopping will keep the average current under the set limit. The peak ratings are for quick transients (e.g. when a motor is first turned on), and the continuous rating is dependent on various conditions, such as the ambient temperature. PWMing the motor will introduce additional heating proportional to the frequency. The actual current you can deliver will depend on how well you can keep the motor driver cool. The driver’s printed circuit board is designed to draw heat out of the MOSFETs, but performance can be improved by adding a heat sink or air flow. For high-current installations, the motor and power supply wires should also be soldered directly instead of going through the supplied terminal blocks, which are rated for up to 16 A.

This product can get hot enough to burn under normal operating conditions. Take care when handling this product and other components connected to it.

Notes:
1 Without included mounting hardware.
2 Absolute maximum; higher voltages can permanently destroy the motor driver. Recommended maximum is approximately 24 V, which leaves a safety margin for ripple voltage on the supply line. Not recommended for use with 24V batteries.
3 Typical results at room temperature with both channels running at 90% duty cycle.

$39.95
This motor driver board is an add-on for the Raspberry Pi Model B+, Model A+, Pi 2 Model B, or Pi 3 Model B that lets it easily control a pair of bidirectional, brushed DC motors. The expansion board...
Add to Cart

Motor Shield for the Raspberry Pi

$15.95
Raspberry Pi Board not Included Designed to help with a Raspberry Pi based Robot project. This board can control a DC motor or stepper motor. You can connect your IR and Ultrasonic sensors to...
Add to Cart

$14.95
Dual Supply for Raspberry Pi (A+/B+/2B/3B/3B+) Power from each Micro USB connector goes via a MOSFET "Ideal Diode" which is then connected directly to the Micro USB socket on the Raspberry Pi. Data...
Add to Cart

$39.95
This discrete MOSFET H-bridge motor driver enables bidirectional control of one high-power DC brushed motor. The small 1.3″ × 0.8″ board supports a wide 6.5 V to...
Add to Cart

$22.95
This compact expansion board plugs directly into the GPIO header on a Raspberry Pi and provides an easy and low-cost solution for driving a pair of small brushed DC motors. Its pair of integrated...
Add to Cart